To previous page      To the front page 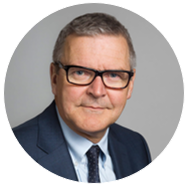 Chairman of the Board of Governors, Danmarks Nationalbank

Lars Rohde took office as Governor by Royal Appointment and Chairman of the Board of Governors of Danmarks Nationalbank in 2013.

Lars Rohde has an MSc in Economics from Aarhus University. He has served as Chief Executive Officer of The Danish Labour Market Supplementary Pension Scheme, ATP, from 1998 to 2013. ATP is one of Europe's largest pension providers. The ATP Group is responsible for the management of assets of more than DKK 748 billion.

Lars Rohde was a member of the Executive Board of the mortgage bank Realkredit Danmark from 1992 to 1997 and Deputy Chief Executive Officer from 1997 to 1998. Among other things Lars Rohde has also been a board member of Copenhagen Stock Exchange and part-time lecturer at Copenhagen Business School.